Lee Squires was hired as the Lander head men's soccer coach in January 2015.

"Coach Squires is recognized in the soccer community as one of the brightest and most successful young coaches in the country," said Jeff May, Lander Athletic Director. "He will be a good fit for Bearcat soccer and Lander University. We are pleased to welcome Coach Squires and his wife Sadie to Lander and Greenwood."

Squires, a native of Sheffield, England who began coaching at Lees-McRae at the age of 23, is also an LMC graduate and played four seasons for the Bobcats. He earned his bachelor's degree in business administration and was a member of the Sigma Beta Delta Business Honors Society. 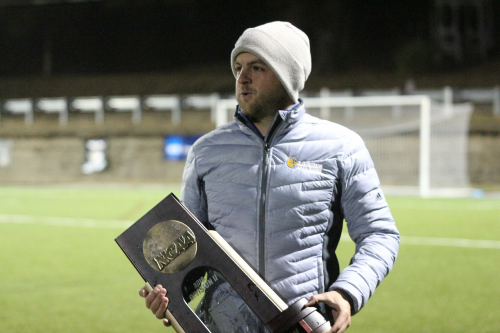 As the LMC head coach, he posted an overall 40-29-7 record during his four seasons for a .572 winning percentage. The Bobcats were 13-5-2 this past season (2014) and reached the Conference Carolinas Tournament championship game. During the year, LMC upset nationally-ranked No. 12 Lander and No. 10 Limestone. His 2011 team reached the NCAA Division II national tournament.

Since 2011, Squires has also served as the assistant coach for the North Carolina Olympic Development Program and was the head coach for the 2011 HSA Force '98 in Premier UK Soccer.

During his career at LMC, Squires, who was the Most Outstanding Offensive Player in the 2007 and 2009 NCAA Division II Southeast Regional Tournament, set single-season school records goals scored (25) points (54) and game winners (nine). He is the Bobcats' all-time leading scorer in goals (67), points scored (149) and game winners (22).

He played for the United Soccer League's Premier Development League, representing the Ocean City Nor'eaters in 2008 and the SC United Bantams in 2012.

All camps and clinics are open to any and all entrants regardless of skill level (limited only by number, age, grade level and/or gender).